CHURCH OF ST.MICHAEL, IPOH - DIARY OF PAST EVENTS IN 2012 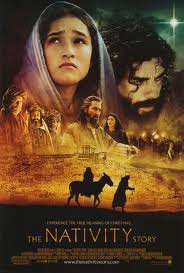 In the spirit of Christmas, the film entitled "The Nativity of Jesus" was screened for free at the St Francis Xavier Hall on the evening of 23rd December 2012. 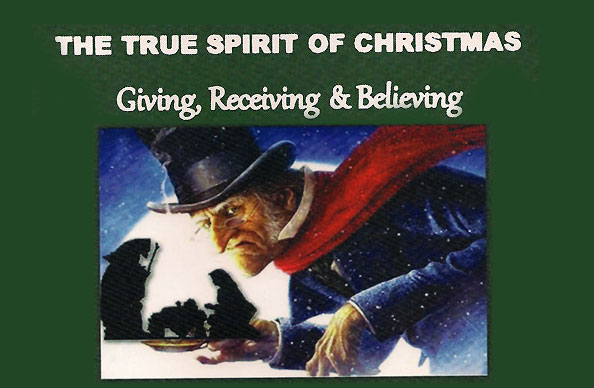 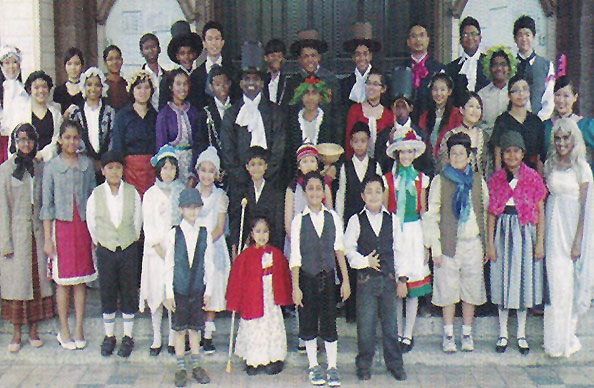 The Youth of St Michael church presented a play entitled "The True Spirit of Christmas - Giving,Receiving and Believing" adapted from Charles Dickens' well-loved classic, 'A Christmas Carol'. Under the guidance of Youth Co-ordinator Terry Jalleh and Stage and Costume Director Annie Fanciulli and Assistant Director Michelina George, the play was met by an enthusiastic audience. The main protagonist,Ebenezer Scrooge, was brilliantly played out by lead actor Marco George. As Youth Co-ordinator Terry Jalleh mentioned, the play was a most appropriate way to close the liturgical year's theme of "Telling the Story of Jesus".

The Chinese Apostolate of the parish celebrated the Mid-Autumn (Mooncake) Festival on the evening of Sat.,22nd Sept 2012. All parishioners were invited to this fellowship celebration.

Anointing of the Sick

The parish celebrated the Feast of the Nativity of the Blessed Virgin Mary on Friday,7th September 2012. Anointing of the Sick was also conducted during this mass and Fr. Stephen Liew, Fr. Anthony Chong, Fr. Michael Dass and Fr. Jude Miranda were in attendance to administer to about 80 elderly and ailing parishioners. The Legion of Mary lead the procession round the church grounds and this was followed by Benediction.

Total donations collected by our parish for the Penang diosesan Lenten Campaign 2012 amounted to RM35,547.00. In addition to that, a separate collection of RM11,485.00 for Batu Arang Community Home in Selangor was raised from generous parishioners.The Parish Human Development Committee (PHDC) thanks all generous parishioners their contributions to the Lenten Campaign. 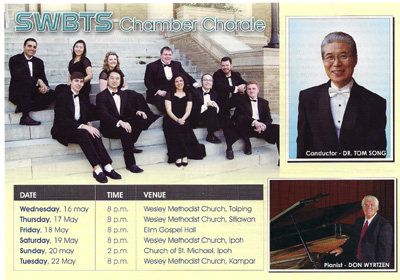 The Southwestern Chamber Chorale presented an enchanting hour and a half choral performance to a packed audience at St. Michael's church on the afternoon of 20th May 2012.Click here for more details about the group.

Our Parish Human Development Committee (PHDC) organised a Voter Education Forum on the afternoon of 5th May 2012. Speakers from both sides i.e the opposition and ruling party members were invited to engage with interested parishioners about voting in Malaysia. Unsurprisingly, no ruling party candidates bothered to show up. The forum was however fortunate to have had the presence of Komas director and Executive Director of Dignity International, Mr. Jerald Joseph and MP for Sungai Siput,Parti Sosialis Malaysia's Dr. Michael Jeyakumar.Eric Bryan from the Community Action Network (CAN) served as moderator for the forum.Monsignor Liew gave a short opening address. He pointed out that there had been some Christians who felt that priests should not be talking about politics from the pulpit. However, if the government of the day behaves in a manner that is oppressive, unjust and blatantly corrupt, it is the duty of all who claim to believe in a true and just God to speak up and stand up against these blatant wrong-doings. As Christians, it is imperative that we be pro-active in ensuring that the government of the day behaves in a just manner and governs in a manner that is free from corruption.

Both Jerald and Dr. Jeyakumar put forward the ideas that Malaysian voters need to think beyond just the present elections and removing shady politicians with blatantly corrupt practices that have become endemic in this country. The average Malaysian voter has to think further beyond the ballot box, because a change in the ruling party may not necessarily bring about an end to corruption and injustice if there are no changes in the mindset and procedures of law and 'patronage-style' of business in this country. Dr.Jeyakumar also put forward the idea that capitalist ideals and Keynesian economic models may not necessarily be the only way of running a country effectively and efficiently. The financial meltdown and constant issuance of more debt papers to get out of debt in many capitalist-style western democracies have shown up weaknesses in these models.

To detract from failed economic policies which weaken the nation, race and religion are always used as the preferred "weapon of choice" by the ruling national front. Unfortunately, even certain members of the opposition were not above playing the race card to gain voters whenever it suited their agenda. Until and unless Malaysians stopped looking and thinking in terms of race or religion , the idea of a truly peaceful and progressive nation will never come to fruition.

Jerald in response to queries from the floor, mentioned that besides just voting, Malaysians can also help to increase awareness among their community about voter rights, volunteering their time and/or money to assist NGOs to verify the authenticity of the electoral roll, vote counting. Dr.Jeyakumar,who runs a centre to assist the poor of Sg. Siput mentioned that he often required volunteers in his work as one of his initiatives in Sg. Siput involves giving tuition to poor children who had no means of attending national schools. The ruling government to date has given NO allocations for his work as an MP of that constituency just because he is not a member of the ruling national front.

The session ended longer than scheduled at around 5.00p.m. PHDC chairman Mr. Albert Lim thanked the forum presenters for their time and efforts in imparting their knowledge and views to the parishioners present. The PHDC then presented Jerald,Eric and Dr. Jeyakumar with fruit baskets as a token of appreciation.

A blood donation drive for Fatimah Hospital was held at the Parish Activity Centre of St. Michael's Church on 22nd April 2012. A big "Thank You" to all parishioners and volunteers who helped to make this event a success.

Parishioners of St. Michael had the rare opportunity of listening to prayer reflections and songs by Fr. Cyprian Consiglio after the evening Ash Wednesday mass on 22nd February 2012. Fr. Cyprian Consiglio, OSB Com., a monk of the Camaldolese Congregation from the USA was on a visit to this region at the invitation of the Malaysian Community for Christian Meditation (WCCM). Fr. Consiglio kept the mood light and reflective, giving insights into the inspirations for his song-writing. His melodious voice and the simple "unplugged" arrangement of guitar music kept parishioners enthralled for an hour. Parishioners were also invited to sing along with him, and surprisingly many did so with much gusto! We thank the WCCM, Monsignor Liew and Fr Consiglio for this beautiful evening of songs and reflection. 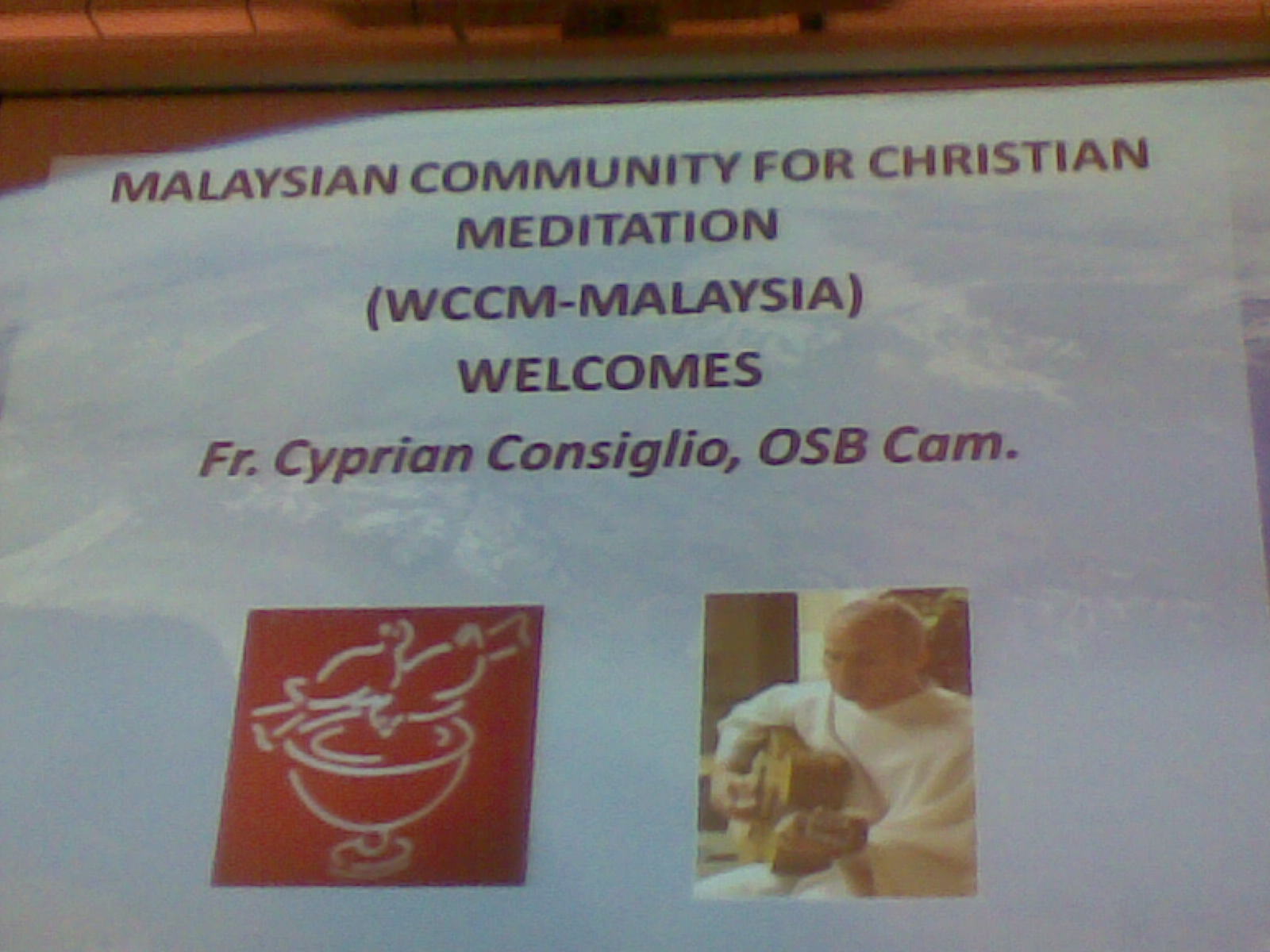 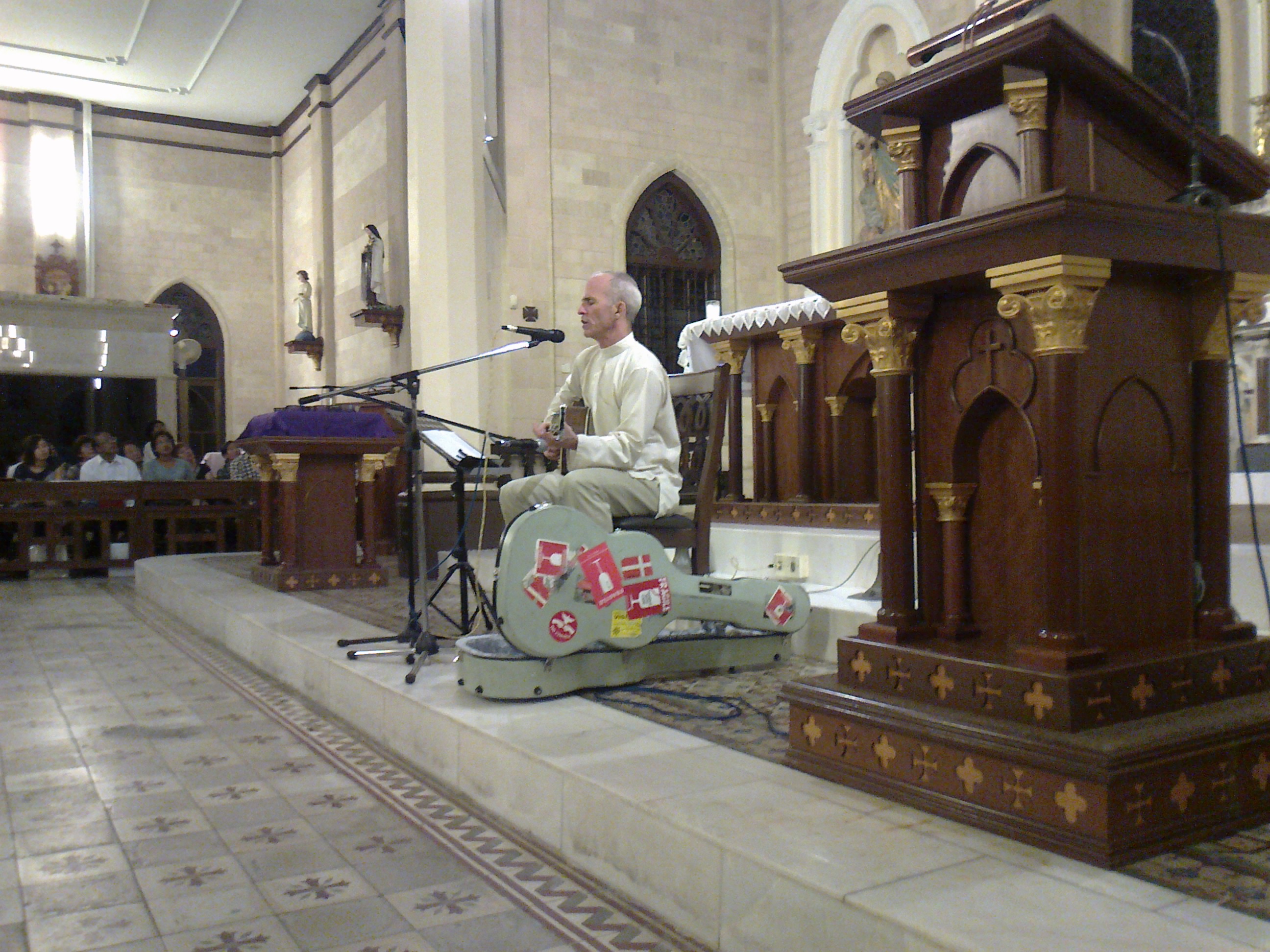 Deacon Aloysius Tan was ordained at St. Michael church, Ipoh on the evening of 6th February 2012. Click here to watch video excerpts from this happy occasion. 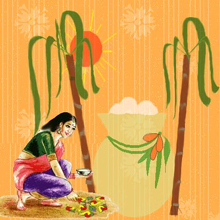 The parish's Indian Group celebrated the Indian Harvest Festival "Ponggal" on Sunday,15th Jan 2012. The traditional boiling of milk in a clay pot was done at the porch of the church before mass. Parishioners were treated to a breakfast of sweet rice after mass.Kolam making sessions were also held at the Parish Activity Centre.